For all our data-crunching, there’s hard limits to what we know. Like it or not, and in any direction, the edge is slippery. Pick something—any plan, prediction, achievement, or grand vision—and watch the limits pile up like parking tickets.

Even if we’ve got some hotshot consultant or killer analytics team on our payroll, there’s no escaping the haunting words of an old African proverb:

So when we hear things like recession fear cueing up a market rebalance, Elon and Twitter getting ready to duke it out in court, or serious claims that selling a million barrels from the U.S. Strategic Reserve to a certain Chinese company will actually lower gas prices… we chuckle.

Instead of tearing our hair out, we put on a knowing grin.

What else would you expect from Wonderland? 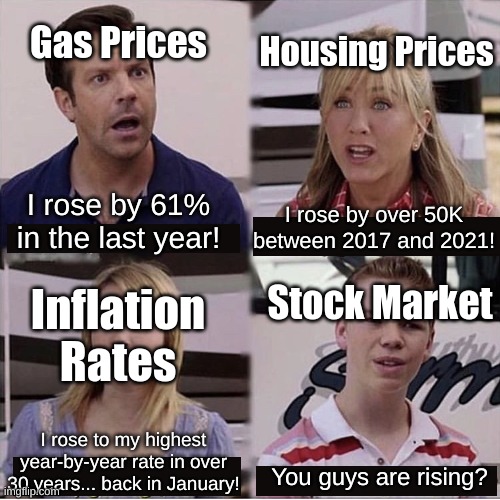 If you’re like us… that is, if you follow financial trends because they’re part of your bread and butter—you make peace with uncertainty…metric tons of it. But if there’s a silver lining, it might be that some unknowns are at least knowable.

A word from Heisenberg…

We mean both of them; Werner Karl, the German physicist who coined the Heisenberg principle, and Walter ‘say my name’ White.

In quantum physics, the Heisenberg Principle tells us that the more we know the position of a given particle, the less we can know exactly where it’s moving…and vice versa.

Boiled down, nothing is static—and even fields like quantum physics come down to whack-a-mole. If you pin down one part of a recession fear, a headline, or a timid chemistry teacher buying an RV for his first meth cook…the unexpected will pop up somewhere.

However delicately we touch one thing, the act of touching it changes everything else.

So while planning and executing in no-nonsense, quantifiable terms builds bridges and sends dudes to the moon, there’s a subtle—and in some ways—just as quantifiable art to taking everything with a grain of salt.

So… knowing all this, where do you want to go?

That’s the question Alice in Wonderland should have posed to Walter White…if the two had met at some bar in the Bermuda Triangle with Tupac and Elvis Presley.

Life’s uncertain, and yet where do you want to go?

The Hero’s Journey asks that question, and offers a path that faces uncertainty with courage, empathy, and a tad more self-awareness.

That’s why we live it. Breathe it. Write about it. That’s why Dare Capital hoists the journey high overhead like the Jolly Roger. We wave our banner so that clients, entrepreneurs, fellow lenders, and anyone on the horizon knows what we’re about.

We embrace it because we’re excited about where you want to go.

The lessons we’ll learn along the way will be the stuff of legend.

So hop on board, give us a call… and get a taste of what the Dare experience is all about.